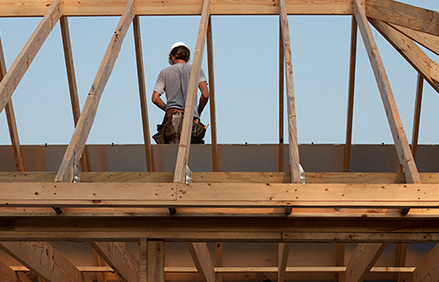 When the builder came to us with complaints of telegraphing through his roof shingles they assumed it was edge swell and the fault lay with the roof sheathing. Most often, swollen edges and buckling panels are caused by common installation mistakes.

One panel was raised and the homeowner believed that it was decayed as the deflection was severe when stepped on. When we removed the panel in question it was discovered that a ceiling joist was sticking up above the surface of the rafter and the panel had been installed right over the joist causing a bump in the roof, and the sheathing panel had been attached around this protrusion.

We solved the problem by trimming the corner and attaching a new panel.

According to the APA Technical Note D481: “Close attention should be paid to proper nail size and spacing and, of course, to assure that fasteners do not miss the supports. Fasteners should be 3/8 inch from panel ends and edges.”

Any mistakes present in the framing will telegraph through the shingles. Before installing the shingles, inspect the framing to ensure that panels are level and aligned. This will prevent expensive call-backs like this one.