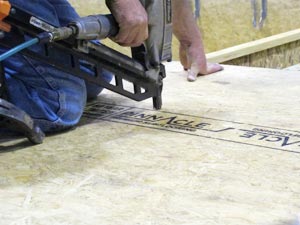 It’s always a challenge to get people with the right skills doing the right job on your construction site. But investing in education is well worth the time and effort because it’s always
cheaper and easier to avoid problems than to fix them later.

The skills and training level will vary from one employee to another and that’s not the only factor to consider. Everyone’s commitment to doing the job correctly is not the same either. Sometimes a combination of poor training, insufficient skills and a lack of desire can end up being very expensive. All too often, poor installation leaves real problems that need to be repaired or there’s a big mess for the next trade to try and work with.

Recently I had the opportunity to spend some time on a job site and saw something so fundamentally wrong that I decided to track down the builder and the framer to make them aware of what I found. The issue was that the sub-floor had not been fastened properly. The fasteners were too far from the corners, they were spaced too far apart, while some fasteners were so far from the edges that they didn’t even hit the joists (shiners).

Yes, it is difficult with power fasteners to know if you hit the support or not but that’s why you double check them. With these particular floors, the T&G sub-floor had been fastened just enough to hold it in place. The intention had been to come back later to complete fastening it down, but by the time contractor got back to the sub-floor, the adhesive had set and the panels could not sit flush on the joist.

The builder and framer were blaming the OSB sub-flooring panels for the squeaks and uneven seams. They claimed that edge swell was to blame and that the panel wasn’t holding the fasteners. It was clear on inspection that this was not the case; the real culprit was the fasteners which were not in the right place, weren’t spaced correctly and the fact that they had allowed the adhesive to set before they finished the fastening. The edges and corners had lifted or were raised by the adhesive and the whole mess was not caused by faulty panels, but rather by poor installation.

How did these floors become a problem?

These kinds of installation issues are caused when you:

How to avoid problems

Share the knowledge on correct sequence and fastener information, properly train your crew members and always check work to ensure that your sub-floor is clean, straight and properly secured before continuing with the flooring installation. Ensure that all crew members know that:

It is important to put your best people on the critical jobs and take the time to train new staff properly because it will pay off in both the short and long term.