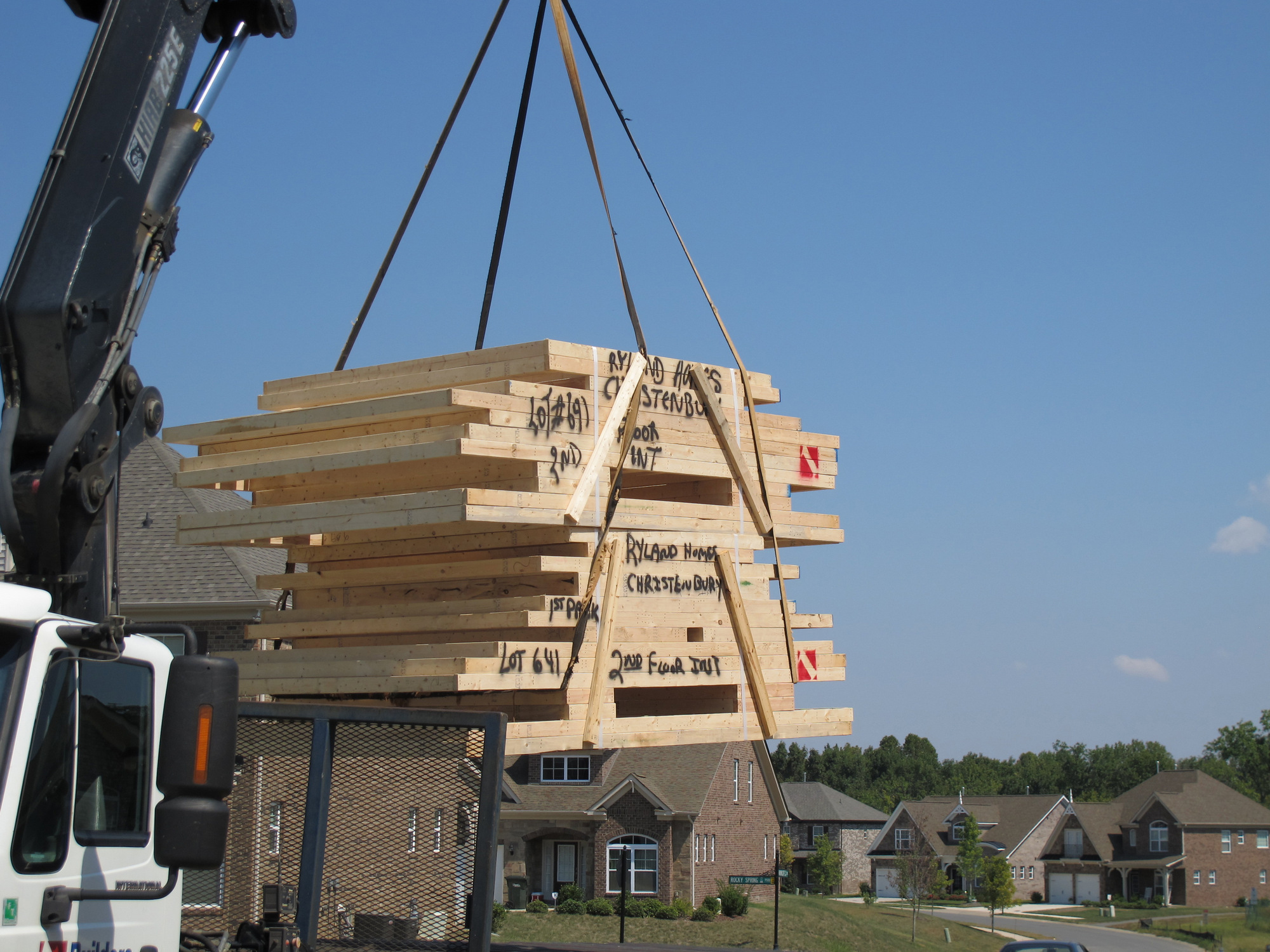 We asked a couple of pros for their opinions on this issue and got really great answers:

Builders site-build walls almost exclusively when labor is cheap and plentiful. In markets where labor is neither cheap nor plentiful, there is heavy wall panelization.

In my opinion, wall panels aren’t used more frequently for the exact reason that roof trusses are used: Framing crews are ‘set up’ to site-build the walls i.e. the typical crew has the skills to build walls from plans, and they’re compensated accordingly, while they typically don’t have the skills to hand-frame the complex roofs of today’s homes (and again, are compensated accordingly). If a crew were stripped-down to a lead person and generally unskilled labor, the labor cost to ‘frame’ would be significantly reduced, and the net, direct costs to use panels would strongly swing the odds in the direction of panels. However, continuing to predominately use skilled labor for an unskilled labor function will skew cost against panels, with no net benefit to any party.

Another issue I touched on when I said net direct costs, is that too many buyers look exclusively at the cost of panels vs. sticks & sheets, adjusted for what the framer might give up in labor. That’s only one slice of the pie; think about waste and dumpsters, theft, time efficiency, quality and consistency, overages, etc. All of these factors are significantly impacted by panels. I would typically expect the dumpster to contain considerably less framing waste. I’ve never heard of anyone stealing panels. Cycle time with panels is day and night compared to site-built. I once saw framing of a 4,400 square foot house with panels upon which they were setting roof trusses before lunch on day one. The quality and consistency of the panels are almost always vastly superior to site-built, which enhances the cycle-time element with reduced inspection issues in many markets.

Because panels are designed and built for a specific application, you never have too few (and have to stop the job, order more, and wait on them to show up) or too many (and hope what’s left over doesn’t get stolen before your supplier might come pick them up for a partial credit). Those pieces make up the other slices to that proverbial pie, and we all know a whole is worth substantially more than just one piece. However, someone has do the math not rely exclusively upon the number in the box under the heading ‘framing’.

If I were a home builder, I would partner with a framing contractor who was willing to re-staff at least one crew to exclusively install panelized walls, and discount his rate accordingly.  Then, I would adjust my budget for fewer/lighter dumpsters, zero-out the line items for job site theft of framing materials, framing re-inspection fees, and framing contingencies.  Then I would cut a few days out of my schedule and move a few hundred dollars of interest carry towards my bottom line.  I would build quicker and cleaner than all of my competitors, sell for less and pocket more.”

What is the overall cost difference between site-framed and panelized homes?

Consider approximately a 10% premium in cost up front to do panelized construction.

What about waste savings?

You can expect a 25% waste reduction when doing panelized which was evidenced by taking a tour of a panelized jobsite with one that is being stick framed. Compare the two jobsites for off cuts and waste and you will likely see a big difference.

Are there any building inspection benefits?
The government doesn’t care how you do it so, no. There are other benefits though. Be sure to look at the increased speed, reduced jobsite waste, reduced waste, and materials moved from one house to another and the quality of construction and installation using panels assembled in a controlled environment.